You can find on this page the Detroit trains map to print and to download in PDF. The Detroit trains map presents the rail network and railway stations of the trains of Detroit in Michigan - USA.
The passenger train has several metro Detroit stations, including Pontiac, Birmingham, Royal Oak, Detroit and Dearborn as its shown in Detroit train map. From the Detroit Amtrak station, you can easily hop on the QLine streetcar at its Baltimore Street station on Woodward Avenue. 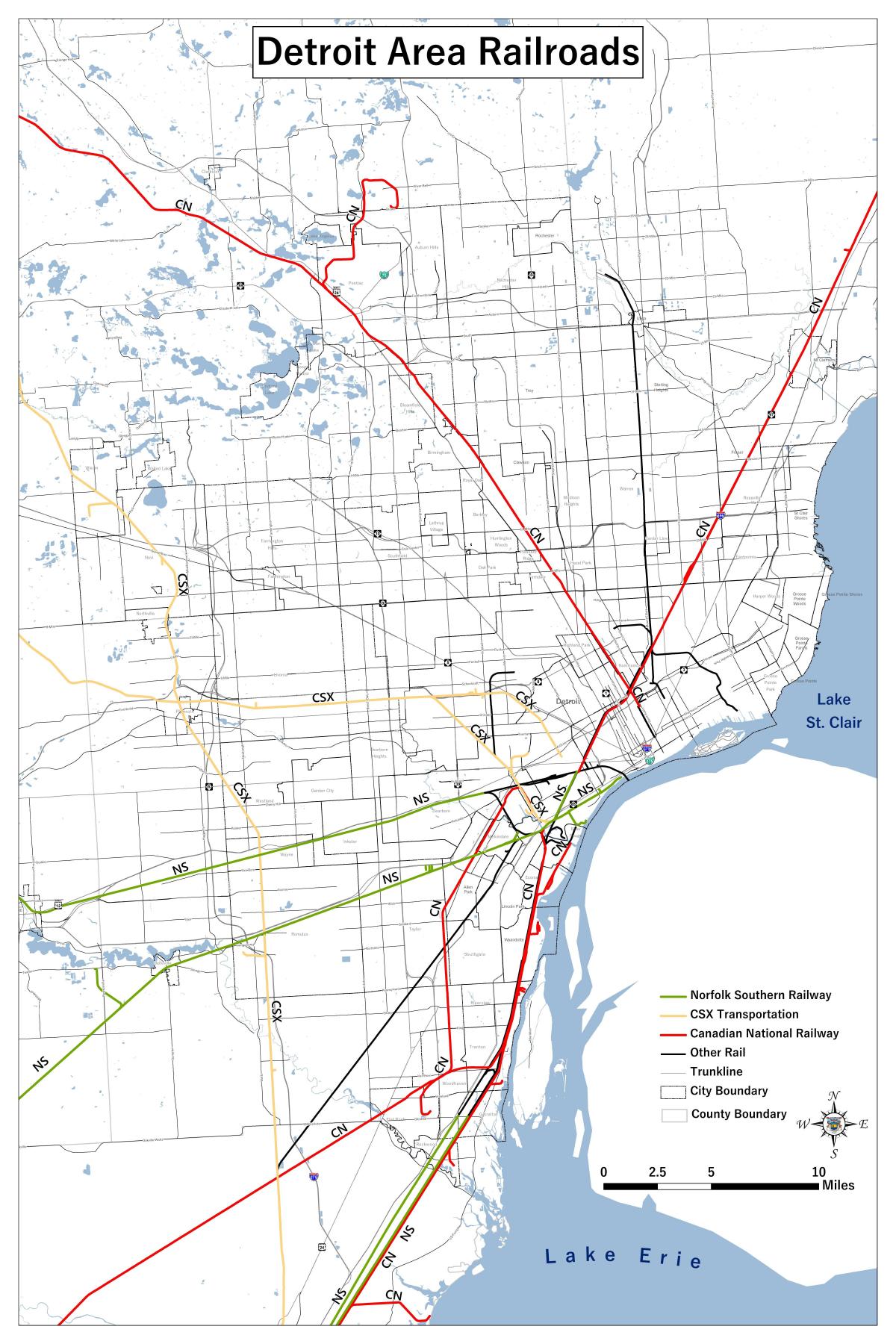 In 1967, the first transit authority of Southeast Michigan was established. It ran suburban bus routes and a commuter rail between Pontiac and Detroit as you can see in Detroit rail map, but could not levy a tax to expand their system or purchase DDOT. Part of an effort put forth by the Urban Mass Transportation Administration, a federal program to develop new types of transit, the Detroit People Mover was meant to be the downtown circulator for a larger regional transit system, similar to the rapid transit plan that Ford dreamed up in 1970. The federal government promised $600 million in funding and plans were developed that would include a partial subway on Woodward Avenue, light rail on Gratiot Avenue, and a commuter train to Port Huron. But due to disagreements between Detroit and the suburbs, the federal assistance was cancelled. Only the downtown loop was ever built and the system was never expanded.

Taking the train to Michigan from Chicago is an easy and ideal means of transportation. Riding the railways from the west is easier than you would think. Visitors from Chicago can take the Wolverine Line, which will lead you through Kalamazoo, Battle Creek, Jackson, Detroit, Pontiac, and intermediate stations as its mentioned in Detroit rail map. The Blue Water line leaves from Chicago and travels to Kalamazoo, Battle Creek, East Lansing, Port Huron, and intermediate stations. Lastly, the Pere Marquette line will take Chicago travelers to St. Joseph, Holland, Grand Rapids, and intermediate stations. These service lines will help Chicago train-takers enjoy Bell Brewery in Kalamazoo, the Tulip Time Festival in Holland, the State Capitol near East Lansing, Beer City USA in Grand Rapids, and historic Detroit. There are so many Pure Michigan experiences to be had via Amtrak train. Additional stations can be found in Albion, Ann Arbor, Bangor, Dearborn, Dowagiac, Durand, Flint, Lapeer, Royal Oak, Troy, and more.

A monorail system, known as the People Mover, operates daily through a 2.9 mile (4.6 km) loop in the downtown area as you can see in Detroit rail map. The city only local rail system, the People Mover is run by the Detroit Transportation Corporation of the City of Detroit, which is not part of the Detroit Department of Transportation, which runs the city transit buses. In March 2008, DDOT announced that it was pursuing building a light rail line along Woodward Avenue. The Woodward Avenue Light Rail is estimated to cost $372 million, and is scheduled to begin operation by 2013. The Southeastern Michigan Council of Governments (SEMCOG) has conducted a feasibility study for a light rail link from downtown Detroit to the Detroit Metropolitan Airport, and is studying the feasibility of light rail or other rapid transit linking Ann Arbor to Detroit.