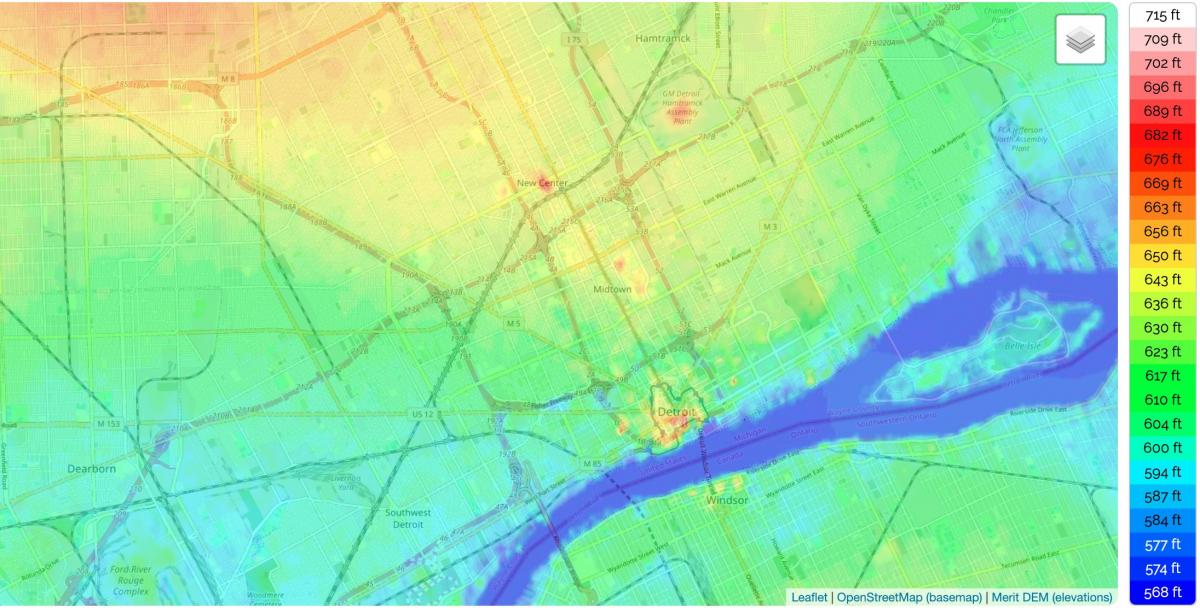 The location, topography, and nearby roads & trails around Detroit (City) can be seen in the map layers above. The latitude and longitude coordinates (GPS waypoint) of Detroit are 42.331427 (North), -83.0457538 (West) and the approximate elevation is 597 feet (182 meters) above sea level as you can see in Detroit elevation map. Detroit has four border crossings: the Ambassador Bridge and the Detroit–Windsor Tunnel provide motor vehicle thoroughfares, with the Michigan Central Railway Tunnel providing railroad access to and from Canada. The fourth border crossing is the Detroit–Windsor Truck Ferry, located near the Windsor Salt Mine and Zug Island. Near Zug Island, the southwest part of the city sits atop a 1,500-acre (610 ha) salt mine that is 1,100 feet (340 m) below the surface. The Detroit Salt Company mine has over 100 miles (160 km) of roads within.

This “elevation map” of Detroit utilizes NASA 90m resolution SRTM data in order to assume topography. As is readily evident, the map shows building heights rather than any topography or land elevation as there is minimal change in elevation across Detroit. Although, it does look pretty. Downtown and Lafayette Park (see Detroit elevation map) show obvious increases in elevation based on skyscrapers.

According to the United States Census Bureau, the city has a total area of 143.0 square miles (370 km2); of this, 138.8 square miles (359 km2) is land and 4.2 square miles (11 km2) is water. Detroit is the principal city in Metro Detroit and Southeast Michigan situated in the Midwestern United States and the Great Lakes region. The highest elevation in the city is in the University District neighborhood in northwestern Detroit, west of Palmer Park, sitting at a height of 670 feet (200 m). Detroit lowest elevation is along its riverfront, sitting at a height of 579 feet (176 m) as its mentioned in Detroit elevation map. On its northeast border are the communities of Grosse Pointe.